The Dorsets sent in their nightly reports to the 15th Brigade HQ and this filtered through to the 5th Division.The diary entry reads (I think) “patrols report of wounded”. What could this mean? Were there wounded out in No Man’s Land? Or were some of the Dorsets wounded while they were out and about?

Rifle fire at intervals was the order of the day. The response from the Germans was to heavily shell the Dorset trenches. Six men were wounded. The shellfire came from a new enemy battery to the north and British guns were asked to locate and engage it the following day.

In today’s Telegraph one hundred years ago, all the Christmas consumerism we seem to think is just a modern phenomena is there to see in all its greedy glory in 1914. On page five, a full page advert*, which is titled “What they need most at the front” begins with a “remarkably enlightening Letter from an Officer”. The letter goes on to recommend Christmas gifts men really needed at the front. Underneath in five columns, run adverts for a range of products, ranging from Oxo, Aquascutum overcoats, Horlick’s malted milk tablets and vaseline. In one of the panels is a pull quote. It reads “–but what they need most of all is MORE MEN”.

The addition of the call to arms message recalls the broohaahaa over this year’s Sainsbury’s advert. Presumably the copy was devised by ad men who were still a long way from signing up to the war effort.

The page uses a no holds barred advertising trick still used today; namely tug at the consumer’s heart and then hit them over the head with the product. John Lewis is still doing it every Christmas.

* Dorland advertising agency placed the advert in the newspaper. They went on to be one of the UK’s, and indeed the World’s, biggest ad agencies. They made the iconic Castrol GTX ad in 1980. 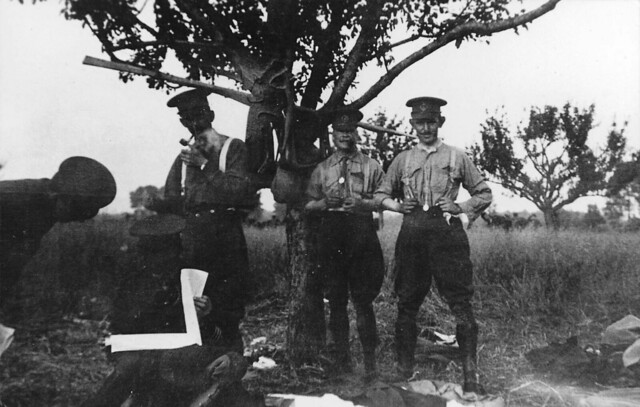